The Las Vegas Parish Council was established in April 1998 and after 12 years of holding our church services in different rented churches; finally in April 1, 2010 we were able to have the first Holy Badarak on our own property, in the St. Garabed Church Hall.

We are grateful for Mr. Larry Barnes for making a generous donation in memory of his late wife Seda Der Garabedian-Barnes. With this donation and funds raised over previous years, on December 18, 2009, we were able to purchase the property located at 2054 East Desert Inn Road and immediately started with necessary repairs, just in time for our first church service on April 1, 2010, coinciding with “Vodenleva” (Washing of the Feet).

On May 23, 2010 His Eminence Archbishop Moushegh Mardirossian, Prelate, with the participation of the Consul General of Republic of Armenia, Grigor Hovhannissian, inaugurated the St. Garabed Hall.

From April 2010 up until December 2013, Archpriest Father Avedis Torossian was assigned to serve as the full-time pastor of the Las Vegas Parish.

On October 20, 2011 His Holiness Aram I, Catholicos of the Holy See of Cilicia, paid a Pontifical Visit to our community and performed a groundbreaking service and the construction of the Dome Cross according to our church traditions dating back thousands of years.

The actual construction phase began on August 24, 2012. On October 5, 2012 we reached an important milestone when the church dome was raised by a crane draped with both with the U.S and Armenian flags after the blessing prayer by the Prelate.

On December 2, 2012, the Prelate visited our parish while the construction was still in progress, and celebrated the first Divine Liturgy in the semi-finished church.

Construction continued on schedule and we received our Certificate of Occupancy on February 21, within only 125 business days from the start of the construction. While we continued finalizing interior details, Holy Week services were held in the new church in order to accommodate the large number of parishioners attending Easter services.

On November 22, 2013, Prelate Mardirossian visited the Las Vegas parish and introduced Rev. Fr. Arsen Kassabian, who was assigned as the new as the new parish pastor for St. Garabed Armenian Apostolic Church.

The weekend of October 18-19, 2014 was a momentous one for members of St. Garabed Church of Las Vegas who celebrated the grand opening of the Cultural Center and Koujakian Hall, signifying the successful completion of the project which had begun in 2009. The weekend’s festivities commenced on Saturday, October 18 with a celebratory banquet held at Cili Restaurant at Bali Hai Golf Course. The official opening of the new complex was conducted by H.E. Archbishop Moushegh Mardirossian, Prelate, on Sunday, following Divine Liturgy. Executive Council members participated in the events.
On Sunday morning the Prelate celebrated Divine Liturgy and delivered sermon at St. Garabed Church, assisted at the altar by Parish Pastor Rev. Fr. Arsen Kassabian. His Eminence began his address by congratulating and commending the parish members on their latest achievement, in particular Mr. Larry Barnes, The Dream Fund at UCLA, and the Fattal, Yemenidjian, and Koujakian families whose generosity was vital to the project. His Eminence reminded the parish that though they have completed the final phase of their project, their mission is not over, stating “The mission of maintaining this church and cultural center, of fostering our faith and heritage, is an ongoing on.” His Eminence stated that the progress achieved by the community is proof of their commitment to carrying out the mission entrusted to them. However, he urged for continuous work to maintain both the church and the cultural center; to preach the Gospel of Christ and draw new faithful to the church, and to preach the beauty and value of our language and culture ad bequeath our heritage to generations. At the conclusion of the service, guests gathered in the courtyard for the grand opening ceremony, which began with the ribbon-cutting, inside the complex, sponsors were in attendance for the unveiling of plaques.
The Prelate once again congratulated and commended the parish members, benefactors and faithful on their grand accomplishments and wished then continued success in the years to come.

2021-Present Board of Trustees

Former Board of Trustees Excecutives

Christianity in Armenia can be traced back to the age of the Apostles. The Apostles Thaddeus and Bartholomew were the first evangelizers of Armenia and, according to tradition, were martyred there. There is historical evidence of the existence of a Christian community and clergy in Armenia prior to the fourth century. The church historian Eusebius of Caesaria (c. 260-c.339) refers to Meruzhanes, a bishop of Armenia in the middle of the third century. It was at the beginning of the fourth century, in 301, that Christianity was first proclaimed as the official religion of Armenia. This proclamation was the result of the missionary activity of St. Gregory the Illuminator (240-332). The fifth century historian Agathangelos recounts the works of the patron saint of the Armenian Church. St. Gregory, a relative of the Armenian king Tiridates (c. 238-314), was brought up as a Christian in Caesarea in Cappadocia. The pagan Tiridates had St. Gregory imprisoned for nearly fifteen years in Khor Virab (“deep dungeon”) in Artashat. Several years later, a group of Christian nuns, led by St. Gayane and fleeing persecution in Rome, came to Armenia. King Tiridates was attracted to one of the women, St. Hripsime, who resisted his attempts to possess her. In his anger, Tiridates had the women killed. After the martyrdom of the women, Tiridates was struck by an illness that turned the king into a wild boar. After all other attempts at curing him failed, the king’s sister St. Khosrovidoukht told her brother that only St. Gregory could cure him. Fifteen years had passed since Gregory’s imprisonment in the dungeon so he was presumed dead. But he was still alive and was released from the dungeon. Gregory cured Tiridates and converted the king and the royal family to Christianity. At this time, Gregory had still not been ordained. In 302, he left for Caesarea, which was an important see at the time, where he was ordained a bishop by Leontius, the Archbishop of Caesarea. Gregory returned to Armenia, baptized the king and the royal family, was installed as the first Catholicos, or chief bishop of Armenia, and continued to convert the Armenian people.

Another important event associated with St. Gregory was the vision that he had in Vagharshapat of Christ descending from heaven and striking the ground with a golden hammer. It is at this spot that the Cathedral of Holy Etchmiadzin (“the Only Begotten descended”) was built. Nearby were built the churches of St. Hripsime and Gayane, where the relics of the martyred nuns are kept.

With the support of the royal family, Christianity was able to spread quickly throughout Armenia and within just a few centuries to permeate all aspects of Armenian life and culture. Furthermore, Armenian missionaries were sent among the Georgians and Alans, who also subsequently established their own national churches.

St. Gregory’s son, Aristakes, succeeded his father as Catholicos. Aristakes had been the representative of the Armenian Church at the Council of Nicaea (325). The Council of Nicaea, the first ecumenical council, set forth the orthodox Christian doctrine of the Trinity. This doctrine is formulated in the Nicene Creed (Havadamk), which is professed every Sunday during the Divine Liturgy. Under Catholicos Nerses the Great (c. 326-373; Catholicos from 353 to 373), monasteries and various charitable institutions were first established throughout Armenia. Rev. Fr. Artsakh Badoyan is born on May 30, 1983, in Beirut, Lebanon. In 1995, he was admitted to the Seminary of the Catholicosate of the Great House of Cilicia and received his religious education for 6 years. From 2007 until 2020, he served at the St. Gregory the Illuminator Armenian Apostolic Church of San Francisco as the permanent Deacon of the parish and the Administrator of the church office. In 2017, he was married to Tamar Ghazarian, and in 2020, their son, Aram was born. Rev. Fr. Artsakh Badoyan was ordained as a married priest in Las Vegas St. Garabed Armenian Apostolic Church on January 24, 2021, by His Grace Bishop Torkom Donoyan, Prelate of the Western Prelacy. 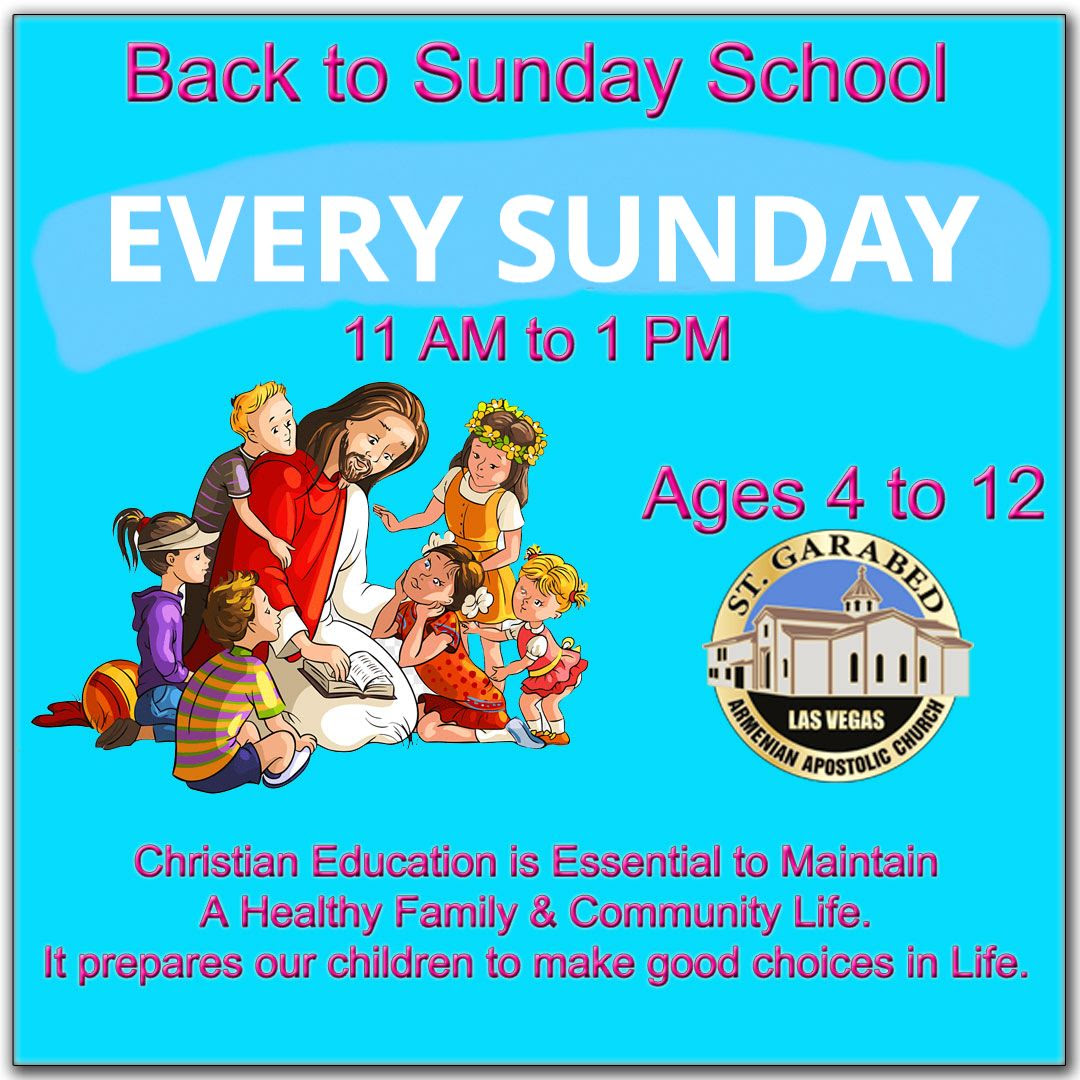 Sunday School Classes for Children ages 3-12 years old: Classes are held every Sunday between 11:00 am to 1:00 pm. We encourage parents to bring their young ones for Christian education, Bible stories, prayers, and arts & crafts. For further information, kindly contact the Church office or Seza Avakian at (702) 786-2507.

Spiritual Reflections and teachings about the Armenian Church will be held every Wednesday at 6:00PM at the “Koujakian” Hall or virtually with details included in our newsletter, conducted by the Pastor, Rev. Fr. Artsakh Badoyan.